The Oostereiland is an artificial island that was built between 1662 and 1668 in the harbor of Hoorn. The island has been formed by constructing dams and later increasing and widening them. Soon after the island came into being, mr. Cornelis Janszoon Schuijt to have homes and warehouses built, including a warehouse for the Admiralty. The access road of the island, the Schuijteskade, has also been named after him. After Schuijt came the Admiralty, it has built more warehouses. 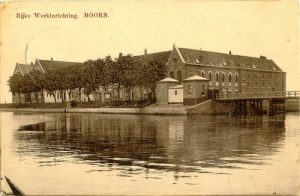 In 1817 the warehouses were converted into beggars and between 1829 and 2003 the complex served as a prison. Between 1886 and 1932, the establishment also served as a government work arrangement, and currants were sorted. To date, the complex is popularly called the “Krententuin”. The courtyard of the complex now officially bears that name.